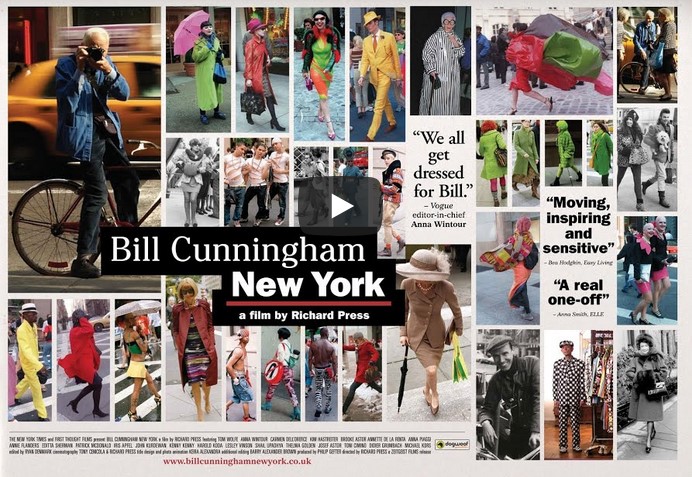 I watch a lot of documentaries, and realized I need to start a list of my favourites, so I don’t forget them!
I’ll start here with one of my all-time faves: “BILL CUNNINGHAM NEW YORK”

The thing that has really stayed with me about Bill is how he makes choices about who and what he shoots.
If he doesn’t find something to be interesting, he just keeps his camera down. Anna Wintour calls that “death”, and indeed, that lack of action speaks very clearly for itself, but I find this approach to be very wise.

Bill doesn’t shoot something that he dislikes and then let writers say mean spirited things about it. The absence of the images speak his opinion, but the silence is still far better than hurtful words. In this modern digital era of mean comments, vitriolic rants and judge-y attitudes, I think Bill can teach us a lesson about how to be classier than all that.

You don’t have to like everything. You don’t have to agree with everything. Instead of taking a pot-shot at it, just be quiet. Say nothing. Shoot nothing. I use the approach in my photography as well. If there is something I don’t like – a place, a piece of public art, etc, I just don’t shoot it.
That way, it’s impossible to know. Did I not shoot it because I just haven’t got to it yet? Do I not like it? Am I indifferent to it? I’ll keep that info to myself. Because, like Bill, I think it’s best to take the high road. Shoot what you love and leave the rest alone.
The other thing I love about Mr. Cunningham is that he keeps it very simple when it comes to his photography equipment. He’s still shooting film, with the same camera he’s had for decades.

He’s not a “gear head”, which is what I call people who think good photography is all about what model your camera and lenses are. He feels no need to get some heavy DSLR, and expensive lenses. He has his technique and it has served him well for a long time. If it ain’t broke, don’t fix it. (In fact, it seems this philosophy extends to other areas of his life as well, and I adore that about him.)

This is important to me because there is always the tempation to believe that a higher model of camera or a new, more expensive lens will make for better images, and this really isn’t true. Shoot with what you have and what you know. Make yourself better, don’t expect the equipment to do it for you.

Bill Cunningham is a huge inspiration to me, even though I don’t shoot film, or street photography. His attitiude, his longevity and his amazing eye for design and style makes him one of the most inspiring creative people out there.

UPDATE: Bill passed away on June 25th, 2016 at the age of 87. The fashion and photography world has lost one of the greats, but his work and the inspiration he created will live on for generations. RIP Mr. Cunningham.